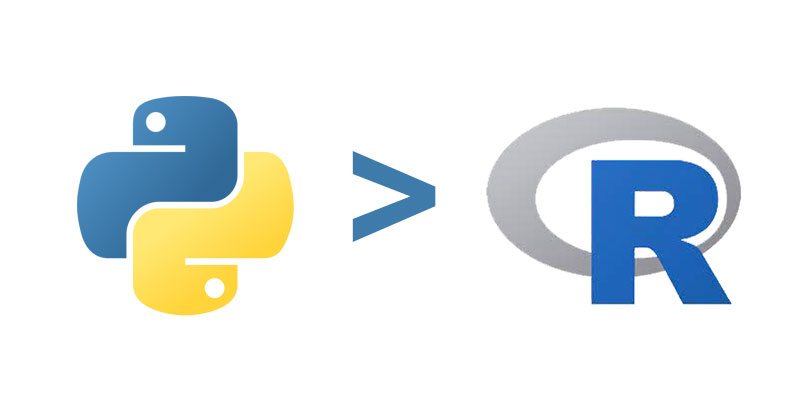 Python has a wider range of applications, to start. In addition to a plethora of other tasks, such as web server and advanced UI design, you may perform data science and statistics similar to those in R. Simply put, there are more users as a result (more fields = more users = more resources). With Numpy, Pandas, and Sklearn, you can essentially do anything you do in R in Python. It might also be hard to use R in building UI and Web API’s in the future as Python has been established as the standard language today for robotics, data, finance, et.

Second, Python can be used more quickly than R. For instance, the Python3 executable comes pre-installed with the majority of Linux systems. It only needs a very little setup, which makes it much easier to publish replicable results. Additionally, it is totally independent of any IDE; for example, neither Pycharm nor Spyder employ any of the Python core developers. This is an advantage that the language has over R. The majority of developers actually utilize R studio. It is more difficult to develop R without R studio, even if R itself is independent of the IDE.

R also offers benefits, such as being very simple to learn and requiring minimal prior knowledge of computer science. Learning Python is definitely the best course of action, depending on your future projects and goals.

But here are a few Cons on R:

We use cookies on our website to give you the most relevant experience by remembering your preferences and repeat visits. By clicking “Accept”, you consent to the use of ALL the cookies.
Cookie settingsACCEPT
Manage consent

This website uses cookies to improve your experience while you navigate through the website. Out of these, the cookies that are categorized as necessary are stored on your browser as they are essential for the working of basic functionalities of the website. We also use third-party cookies that help us analyze and understand how you use this website. These cookies will be stored in your browser only with your consent. You also have the option to opt-out of these cookies. But opting out of some of these cookies may affect your browsing experience.
Necessary Always Enabled
Necessary cookies are absolutely essential for the website to function properly. These cookies ensure basic functionalities and security features of the website, anonymously.
Functional
Functional cookies help to perform certain functionalities like sharing the content of the website on social media platforms, collect feedbacks, and other third-party features.
Performance
Performance cookies are used to understand and analyze the key performance indexes of the website which helps in delivering a better user experience for the visitors.
Analytics
Analytical cookies are used to understand how visitors interact with the website. These cookies help provide information on metrics the number of visitors, bounce rate, traffic source, etc.
Advertisement
Advertisement cookies are used to provide visitors with relevant ads and marketing campaigns. These cookies track visitors across websites and collect information to provide customized ads.
Others
Other uncategorized cookies are those that are being analyzed and have not been classified into a category as yet.
SAVE & ACCEPT